After a scary drop on June 20, the stock has recovered ground swiftly. The stock is in an uptrend and any dip to support would therefore be a buying opportunity.

From the attached daily chart, the breakout above the red trendline is apparent. Any fall now, either to the lower blue line or the red line, would be a buying opportunity.

The stock has been in steady downtrend from April 1 high of Rs.1,065.55. The crucial support level of Rs.900 was breached a couple of weeks ago and this level would now act as a significant resistance.

Interestingly, the stock on Friday reversed at Rs.906 and closed near the day’s low of Rs.858. From the second chart featured above, which is the zoomed-in version of the other chart, it is apparent that the prior support is now acting as resistance.

Any rally would now be a shorting opportunity with a stop loss at Rs.915, for a target of Rs.800.

The stock has been in an uptrend since Feb. 14. In the attached daily chart, it is apparent that the rally was halted at the green resistance line, a couple of days ago. A minor downward correction to the support level at Rs.255-258 appears likely.

Long positions may be considered on a dip to this support level, with a stop loss at Rs.241. The first target is Rs.290 and the major target-cum-resistance is at Rs.320.

The aggressive short-term traders may smell shorting opportunity in the potential fall to Rs.255-258 range.

While there is merit in considering this short trade, the caveat is that it’s a counter-trend trade and is therefore risky. Always try to take trades in sync with the underlying trend.

This stock has been one of the top performers in the recent weeks. It’s however headed towards Rs.174, where the sellers might be willing to smack it. 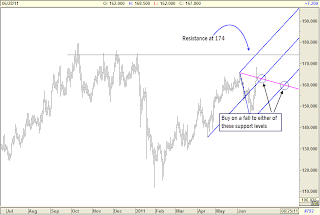 Those who are long may consider at least partial profit booking if the stock struggles at Rs.174. Those wanting to buy the stock may wait for a pull-back to Rs.158-162 range, with a stop loss at Rs.154, for a target of Rs.185.